I wish to request under the Official Information Act, the following information:

END_OF_DOCUMENT_TOKEN_TO_BE_REPLACED 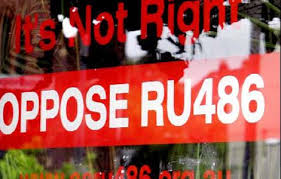 END_OF_DOCUMENT_TOKEN_TO_BE_REPLACED

Re 2 August. The twenty-five churches in Tauranga who have pledged to assist women who are need of help in bringing their precious unborn children to birth are to be commended. Tauranga is giving a brilliant example of a community that is caring and compassionate. It is an example that should be emulated by other communities. We all have a duty to defend life especially that of unborn children who are the weakest and most defenceless members of the human family..  Studies done overseas reveal that sixty per cent of women seeking an abortion are doing so because they are being coerced by others. for so often they have been abandoned by the father of the child. It is disappointing that the spokesperson of the Abortion Law Reform Association, Alison McCulloch, is critical of the churches that are prepared to provide practical help to women. The Association is an advocate for a culture of death, it  does not represent the real interests of women. The Association with less than 100 members nationally has very minimal support from women. Would ALRANZ and Family Planning  please inform the community why they are not prepared to offer practical help to women who choose life for their baby?

END_OF_DOCUMENT_TOKEN_TO_BE_REPLACED

Thank you for your letter of 23 May 2013 and enclosures. It is noted that the holder of the abortion licence for the Tauranga Family Planning clinic is Ms Jacki Edmund. Ms Edmund is the Chief Executive Officer for the New Zealand Family Planning Association and is stationed at its national office in Willis Street in Wellington.

The application for a licence was completed by Ms Edmund on  6th December 2012. Section 20, Applications for Licences, of the Contraception Sterilisation and Abortion Act 1977 [CS & A Act ] states [b] In the case of any other institution, the person for the time being in charge of the institution.

It is noted  that it was Parliament’s intention in passing this legislation in 1977 to require the person holding the licence to be a fit and proper person to hold such a licence.

END_OF_DOCUMENT_TOKEN_TO_BE_REPLACED

The New Zealand Family Planning Association has been granted a licence by the Abortion Supervisory Committee to kill unborn children at its Tauranga clinic. This is the first Family Planning clinic licenced to kill the unborn.The licence permits medical and surgical abortions up to twelve weeks. The Association is expected to use the French murder pill, Mifegyne RU 486 which is a lethal human pesticide which destroys the tiny human being by depriving the child of nourishment causing it to die of starvation.

Abortion is violence against vulnerable women and their precious unborn. Right to Life is opposed to the Association being granted a licence to inflict violence on vulnerable women and kill innocent and defenceless unborn children. Our Society questions why the Abortion Supervisory Committee would grant an abortion licence to such an organisation.

Family Planning is engaged in a national campaign to decriminalise abortion which would allow abortions on women for any reason or no reason up to the birth of the child. The citizens of Tauranga and the Bay of Plenty should rise up and make it known that the Association and its killing centre are not welcome in their community. Communities throughout New Zealand should now be alerted to the threat that Family Planning may in the near future be seeking to open an abortion clinic near you.