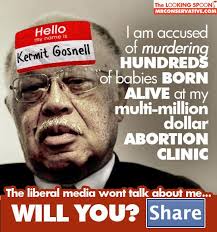 END_OF_DOCUMENT_TOKEN_TO_BE_REPLACED

The following post if by Shelia Liaugminas at MercatorNet.

Revelations about the abortion industry are coming out at a new pace now and in greater detail than ever. It’s forcing a very public confrontation with the truth about abortion and getting people talking as some never have before. The cover-ups are getting uncovered, and Big Abortion is getting unprecedented exposure.

They got plenty of that at the Democratic National Convention last summer, which celebrated abortion as we’ve never seen in American politics. But that’s the kind of exposure the industry wants. What’s going on now is new for them and the American public and the connected global universe tuned in, and nearly 40 years after Roe, we’re finally talking about and looking at abortion in its raw reality.

It’s been sort of a perfect storm, what’s happened in the past few weeks to precipitate an unprecedented public and even media confrontation with the whole issue of abortion. The trial of infamous abortionist Kermit Gosnell finally made the news when Kirsten Powers, a “Democratic strategist” and liberal commentator started calling out the media on it, and savvy pro-life people launched a grassroots social networking campaign to shame the media into paying attention to crimes against humanity they’d known about for years now on full display in court.

This case took years to come to trial. To call that a travesty is a ridiculous understatement. The authorities in the state of Pennsylvania passed off on checking this and other abortion clinics for years and years. This Atlantic article details it all, from the grand jury report.