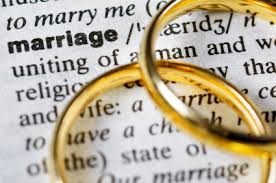 Thank you for your letter of 18 April. You are to be commended for polling every home in your electorate to establish your community’s support for retaining the institution of marriage as being exclusively between one man and one woman. Your survey revealed unsurprisingly that 73 per cent of your electorate were opposed to redefining marriage to include same sex couples.

END_OF_DOCUMENT_TOKEN_TO_BE_REPLACED

Redefining marriage to include people of the same sex is a legal endorsement of the fungibility of a man and woman in marriage. To set “any two persons” on a par with a man and a woman in marriage is to reduce the worth of their roles. To draw an analogy, if a government declared the price of coal to be equivalent with the price of gold, would the cost of coal go up, or would the cost of gold come down?

The following article is by Carolyn Moynihan on the ‘Conjugality ’ blog of the MercatorNet website. The post has attracted a large number of comments and reveals that it is far from being the popular move that is being touted by the gay friendly media. This legislation is not only hugely contentious, but the bullying methodology with which it has been rammed through parliament  without adequate consultation and without a proper consideration of the consequences belies understanding. That the ‘rights’ and desires of a minor number of adults can trump the rights of our nations children simply shows the moral decrepitude of the majority of our MP’s.  – Right to Life comment.  How they voted.

Last night (April 17) 77 people changed the institution of marriage in New Zealand from a conjugal union with the potential for generating children and providing them with the nurture of their own mother and father into “a union of 2 people regardless of their sex, sexual orientation, or gender identity” with the potential for systematically depriving children of their mother or father, or both. All in the name of “love”. Starting in August.

Actually, just 17 people managed to do that, because the New Zealand Parliament currently has 121 members and if 17 of the 77 who finally voted for the “definition of marriage” bill had voted against it and with the 44 who opposed the move, this South Sea revolution could have been put down and time taken to properly discuss the whole idea. The notion put about by MPs and journalists that there has been a “fierce debate” on same-sex marriage over the past seven or eight months is sheer fantasy.

END_OF_DOCUMENT_TOKEN_TO_BE_REPLACED

New Zealanders for Marriage is holding an interfaith prayer vigil at Parliament grounds  on Wednesday 25th March between 6.45 pm and 8.45 pm

The prayer vigil is to give a united witness to our MP’s that marriage is a unique covenant between one man and one woman and needs to be protected by the law.

Right to Life encourages all New Zealanders who are concerned about what could be the imminent passing of legislation in our New Zealand Parliament that will change the legal definition of marriage to include members of the same sex to immediately contact their MP’s. The following link may be helpful.

Leader of the Opposition,

Thank you for your letter of 14 March 2013. You advise that you support the Marriage[Definition of Marriage ] Amendment bill because marriage equality is about fairness and choice.  It is commendable that you support fairness and choice. It is contended however that for the following reasons this contentious bill is both unfair and restrictive of choice.

Many people in the community supported the passing of the Civil Union bill in 2004 and the amendment of 150 pieces of legislation to protect the rights of the homosexual community. The community were given an assurance that the institution of marriage exclusively for one man and one woman was sacrosanct. The prime Minister, Helen Clark gave the following assurance and we believed her public assurances. It is understandable that many people now feel deceived and betrayed. It is noted that the Labour Party did not campaign at the last election on this issue. I and many others consider that this is most unfair. Tim Barnett, also gave the following assurances;

END_OF_DOCUMENT_TOKEN_TO_BE_REPLACED

The Following letter has been sent to  MP’s

New Zealand has the highest rate of fatherless children in the OECD. Right to Life believes that every child has a human right to know and be loved by its biological parents. Every child needs a mother and a father. More than 200,000 children, a third of our children are growing up without their fathers. This bill  proposes that children do not need a mother and a father, just two men or two women who love them.  The passing of this controversial  bill will result in an increase in fatherless children. Do you think that it is fair that children be deprived of their father or mother?  What choice will this bill give to children? Why would Parliament want to deprive children of their father or of their mother?

The passing of the second reading of the Marriage [Definition of Marriage] Amendment bill on Wednesday the 13th March is a day that will go down in the history of our Parliament as a day of shame. The bill was passed in a conscience vote by 77 votes to 44. The third reading of the bill is expected on 3rd May.

It is a day of shame firstly because Parliament has a duty to uphold the common good. Marriage, consisting of one man and one woman is the foundation stone of the common good. Parliament and the government have a serious duty in justice to uphold and defend marriage as instituted by God from those who wish to redefine it. The people of New Zealand have a right to know why they abandoned the battlefield and allowed the forces of darkness to prevail. It was shameful that the leaders of six political parties in Parliament actually supported the bill. The Prime Minister because of his betrayal of the families of New Zealand has forfeited his right to lead this nation. David Shearer, the leader of the Labour caucus in Parliament because of his enthusiastic support for this destructive bill has also forfeited his right to be for elected as Prime Minister.

It is also shameful that the media have failed to uphold the common good and have supported the bill. They have failed the community that they claim to serve.

END_OF_DOCUMENT_TOKEN_TO_BE_REPLACED

The following is release made today  by Family First.

Family First NZ has produced evidence that the Government Administration Select Committee (shown right – supporters of the bill) considering the Marriage Amendment Bill has treated unique submissions opposing the bill as form letters in a desperate attempt to ram through the bill. The Committee, which was quite obviously biased, labelled the thousands of submitters using the Protect Marriage resource as ‘form letters’ and treated them as one and the same, rather than as ‘unique’ as they should have been. This denied them the right to make oral submissions if they requested to. The supporters of the bill simply went online to a website, ticked statements that they agreed to, and then sent it through. They all said virtually the same thing. Typed, identical, same phrasing – with an occasional added comment.” “But those using the Protect Marriage forms only had the headings. They had to submit their own ideas from scratch – and they were all very different. They were raising different points, speaking from personal view and experience, explaining their professional expertise, etc. And many wanting to speak to their submission but were therefore denied the opportunity because they were treated as ‘form letters’.”
SEE THE EVIDENCE HERE

END_OF_DOCUMENT_TOKEN_TO_BE_REPLACED

Marriages are a matter of significant public concern, as the record of almost every culture shows. If it weren’t for the fact that sexual intercourse between a man and a woman leads to children and brings with it a further obligation to care for those children, the notion of marriage would probably never have existed, and the state would not have been interested in it. The state – which did not invent marriage – has no authority to re-invent it.

Marriage encourages the raising of children by the mother and father who conceived them. On average, children raised by their biological parents who are married have the best outcomes in health, education and income, and by far the lowest involvement with the criminal justice system. As Prominent Irish homosexual and political commentator Richard Waghorn says, this is certainly not to cast aspersions on other families, but it does underscore the importance of marriage as an institution

The Government Administration Parliamentary select committee has referred the Marriage [Definition of Marriage] Amendment Bill back to Parliament with the recommendation that it be passed. with amendments.

The majority of the Committee consider that marriage is a human right and that it is unacceptable for the state to deny this right to same-sex couples. This is spite of the fact that there is no United Nations Convention that declares that same sex couples have a human right to marriage or adoption.

Right to Life requests that Parliament recognises its very serious responsibility, to defend the institution of marriage being exclusively for one man and one woman. It should now firmly reject the recommendation of the select committee and defeat this mischievous and unjust Bill at its second reading.

In 2004 the Civil Unions Bill was passed protecting the rights of homosexuals in a same sex relationship. This gives homosexual persons effective equality under the law, without redefining the marriage relationship.