Right to Life believes that it is imperative that we protect our vulnerable elderly, especially those in dementia care, from the increasing threat of being killed by a doctor with a lethal injection or assisted in suicide under the guise of health care.

New Zealand has a growing problem of providing health care for those suffering from dementia. It is estimated that the number requiring care in 2020 was 70,000, it is expected to  increase to 100,000 in 2030 and to 170,000 in 2050. If the End of Life Choice Act 2019 was extended to provide for advance directives, a duty to die could be imposed on these very vulnerable patients.

Right to Life recently wrote to 11 leading Retirement Home organisations in New Zealand promoting our euthanasia free policy. The following Retirement Village organisations have responded by advising that residents in their care facilities may not have their lives terminated by a doctor with a lethal injection or assisted in suicide: Ryman Health Care, Heritage Lifecare, Oceania Healthcare and Summerset.

Euthanasia and assisted suicide are intrinsically evil, they have no place in a retirement village. Right to Life commends these organisations for providing their residents in care with a safe environment, and therefore these organisations deserve our support.

It is disappointing that 3 of the 11 retirement village organisations contacted would allow their residents to be legally killed by a doctor in their facilities.

Arvida advised ”We believe that residents can choose assisted dying, provided they initiate it.” The Managing Director of BUPA advised that  ”for residents who are in care with us, given that this is their home, we will facilitate any assisted dying process to occur if this is what the resident wishes.”

The Chief Executive Officer of Metlifecare advised that ”Metlifecare would determine on a case by case basis whether it is appropriate for a resident who has been determined pursuant to the Act, to be eligible for assisted dying and wishes to receive assisted dying in their independent living unit or aged care home.”

To protect our most vulnerable loved ones the government must impose a total prohibition on euthanasia and assisted suicide in aged care facilities. Administering a lethal injection or assisting in suicide is not health care and it has no place in a retirement home.  Would you place your loved ones in a retirement home if you knew that that home allowed them to be killed at their facility? Right to Life has warned for years that the right to die will ultimately become a duty to die.

Right to Life believes that we have a duty to protect our vulnerable elderly in aged care facilities and those in dementia care, who are in dire peril of being given a lethal injection or assisted in their suicide, under the guise that this is health care.

The first Assisted Dying report from the Registrar of [Assisted Dying] for the period 7th November 2021 to 31st March 2022 revealed that 66 people had been killed during that period. 6% had been killed by a doctor in a Public Hospital, 4% in a hospice facility, 17% in aged care facilities and 73% in the person’s home or another private residence.

Right to Life is very concerned that twelve patients were killed in retirement homes. We are opposed to our loved ones in care becoming victims to a lethal injection or being assisted to commit suicide. Right to Life encourages the management of aged care facilities to protect the residents entrusted into their care by declaring their facilities euthanasia free.

There are 422 rest home villages in New Zealand with 47,249 elderly people in residence. It is estimated that this number will increase to 81,000 people in rest homes by 2033.

New Zealand already has a disturbing rate of elder abuse. Aged Concern believes that one in ten persons over the age of sixty-five are victims of elder abuse. Euthanasia is the ultimate form of elder abuse. In Holland 500 people are killed each year with a lethal injection, without their knowledge or consent.

The government supports doctors killing their patients or assisting in their suicide and is prepared to pay doctors up to $3,000 for each patient killed. It assures the community that the End of Life Choice Act 2019 is very safe and provides protection for patients. We should not be seduced by these assurances because overseas experience reveals that the law soon gets extended to include advance directives and the killing of those with dementia and Alzheimer’s. Overseas experience also shows that the mentally ill are now eligible for euthanasia. In the Netherlands last year, 116 persons were euthanised for reasons of mental illness.

There are currently an estimated 70,000 persons have dementia in New Zealand, with the number expected to rise to 170,000 by 2050, with the cost for their care totalling $5.9 billion. It was the Royal Commission on Contraception, Sterilisation and Abortion that stated in its report to Parliament in 1977:- “ that if we failed to recognise the humanity and right to life of the unborn child then a future government would deny the humanity of those at the other end of life.”

Right to Life warns our Parliament and government that if they continue to ignore this prophetic warning and continue to uphold the legal fiction in the Crimes Act, section 159 that states that the unborn child is not a human being until it is born, then a future government will adopt the fiction that a person with dementia or Alzheimer’s is no longer a human being, has forfeited their right to life and may be killed at the direction of the state with a lethal injection, all of course under the guise that it is a “health service”. 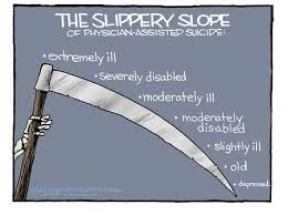 Two very disturbing stories regarding the expansion of Euthanasia are emerging in Europe.

The first concerns developments in the Netherlands where the Supreme Court has approved the forced euthanasia of patients with dementia, if they asked to be killed before becoming incompetent. This applies even if they could no longer confirm this because of their illness.  “A doctor can carry out an (earlier) written request for euthanasia from people with advanced dementia,” the Supreme Court said in a summary of its decision.

What the Reuters story failed to mention – and apparently the Supreme Court found to be irrelevant – is that the case in question involved a woman who fought against being killed. Nor does the story mention that the doctor had drugged the woman before starting to euthanize her, and that the doctor instructed the family to hold the struggling woman down so that she could administer the lethal injection. Moreover, the patient had also stated in her instructions that she wanted to decide “when” the time for death had come — which she never did. The termination “choice” was made by the doctor and/or family in violation of the patient’s advance directive.

The Supreme Court judge Willem van Schendel ruled the doctor involved in this case acted with ‘due diligence’ and was therefore not punishable. He also said that in hat in advanced dementia cases, doctors must pay particular attention to the legal requirement that the patient is suffering “hopelessly and unbearably” as a result of dementia.  Right to Life points out that other than our belief that deliberately injecting lethal chemicals into a patient to kill them is wrong in all circumstances, who decides when a patients suffering is ‘hopeless and unbearable’. Such vague and subjective terms make future abuse of their current laws a certainty.

Van Schendel also said that in such cases “not one, but two independent doctors” should be consulted about whether the written directive can be honoured.” ….Now where have we heard that the safeguard of two independent doctors would protect human lives before? That’s right it was back in 1977 when New Zealand’s Contraception Steralisation and Abortion Act was passed (with the result that since that time over 500,000 unborn New Zealanders have been murdered).

The second concerns France where controversy broke out at the end of march because of a government decree making the drug Clonazepam available outside its specific marketing authorisation in order for  it to be used on patients with respiratory distress in the context of the Covid-19 epidemic. Critics are concerned the drug can now be used to kill off the fragile and elderly. The problem appears to be that those administering the drug in care homes are not trained in the use of this drug and that excessive dosages appear to be being used.

Both these cases illustrate the very real dangers of taking Euthanasia out of our criminal code. Evidence abounds in all jurisdiction overseas that where it has been let loose that Euthanasia continues to expand and that the slippery slope is a very real one indeed. It is vital that New Zealanders are informed about these dangers before the coming referendum on the End of Life Choice Bill.

Thanks to LifeSiteNews.com for the linked articles.

“I will argue that euthanasia” is defined by the intention to bring about a patient’s death, rather than by its being an active killing”