Should we expect our Labour government that promotes and funds the violent killing of our precious children before birth to be concerned about our appalling fertility rate? Is the Prime Minister seeking to promote a one child family policy? Why too are the Churches silent? Our birth rate has been below replacement level since 1975.

Why is the Prime Minister, Jacinda Ardern and her government, silent in response to New Zealand’s appalling birth rate? Our nation is facing an increasing demographic winter which will have a catastrophic effect on the future of this nation. We have an increasing ageing community with a declining workforce to support them and look after them. Why does the government not have a policy to increase our birth rate and confront this crisis?

Right to Life applauds the courageous women who sacrifice themselves by choosing to have children and raise them in spite of the formidable obstacles confronting them, especially the thousands of solo mothers who are raising children alone. We also applaud the noble women who chose life for their baby in the face of abandonment of the father and coercion to choose abortion.

Right to Life believes that there are many reasons for this crisis.

The Labour government of Jacinda Ardern has undermined motherhood, the dignity of the family and the humanity of the unborn child by passing the Abortion Legislation Act which promotes the fiction that the child is not a human being until it is born. It is now no longer a crime to kill an unborn child but in the words of our Prime Minister, “a reproductive choice for women.”

·       Abortion, one in five potentially normal pregnancies ends in the killing of the child in the womb. Each year more than 13,000 innocent and defenceless unborn children are poisoned, violently dismembered or sucked out of their mother’s womb. Each child is a unique and unrepeatable miracle of God’s loving creation.

·       The failure of the government to promote open adoption as a loving option in preference to the violent killing of the child in an abortion.

·       The excessive cost of housing, both building and rental. New Zealand is the second most expensive country in the OECD to raise a child.

·       The economic pressure on women to be in the workforce in preference to being a dedicated mother at home raising a family.

The government needs to urgently publicly acknowledge the demographic crisis and formulate a policy to promote marriage exclusively between one woman and one man and to promote child rearing. Two thirds of countries in Europe have measures to encourage fertility, baby bonuses, tax incentives and paid parental leave. Even China is now promoting three children per family.

I believe we desperately need religious freedom provisions in the Australian Constitution to ensure that Christians are free to live out their beliefs safely and legally. The denial of religious freedom has always been a hallmark of totalitarian regimes; such oppression is becoming common in many countries now under the guise of anti discrimination laws. This has no place in a free country.

Allow me to document this controversial assertion.

As predicted, the debate regarding the redefinition of marriage has, as some predicted, unleashed a tide of hatred and bigotry. However, overwhelmingly, this has been squarely aimed at Christians. Listed below are numerous occasions where Christians have been the target of unwarranted discrimination, persecution and vilification. Hardly any of those people who vilified, harassed and assaulted Christians experienced any detrimental legal or social consequences for it.  Most of them remain in positions of authority and influence.

END_OF_DOCUMENT_TOKEN_TO_BE_REPLACED

Right to Life considers that the election of Jacinda Ardern as our Prime Minister would constitute a threat to the natural family of exclusively one woman and one man.

A government orientated toward public welfare and responsible parents, owe it to the next generation to prepare them for natural marriage exclusively between one woman and one man as a family. The electorate has a right and a duty to ensure that they elect only those who are going to defend and promote the natural family and be role models for our children and grandchildren. It is therefore disappointing that Jacinda Ardern  is openly cohabitating with a man who is not her husband. Is this the example that we want for our children and grandchildren?

A transgender activist is trying to silence the Catholic Church in the Australian state of Tasmania on the issues of homosexuality, transgender, and same-sex marriage.

Martine Delaney, who will be a Greens candidate for the next Federal election, has lodged a complaint with the Tasmanian Anti-Discrimination Commission over a booklet produced by Australia’s Catholic bishops, “Don’t Mess with Marriage”. It was distributed in Tasmania by the Archbishop of Hobart, Julian Porteous, to the parents of students in Catholic schools. The two parties have just announced that they wil attend a conciliation conference.

In a lengthy press release Ms Delaney said that the booklet only pays lip service to respect for same-sex-attracted Australians by insisting that they should be treated with “respect, sensitivity, and love”. But she interprets these as weasel words. She says:

“By spreading this message, the Church does immeasurable harm to the wellbeing of same-sex couples and their families across Tasmania and the nation – particularly those who are students, teachers or parents within the Catholic education system.”

END_OF_DOCUMENT_TOKEN_TO_BE_REPLACED

Australian research from the 1990s has emerged as key evidence in the debate about same-sex parenting.

The constant refrain from supporters has been that there is no difference in outcomes for children in traditional marriages or same-sex couples. In 2010 Judge Vaughn Walker struck down a voter-approved constitutional referendum in California, partly because he found no sociological evidence of a difference. He put the conventional wisdom in a nutshell:

“Children raised by gay or lesbian parents are as likely as children raised by heterosexual parents to be healthy, successful and well-adjusted. The research supporting this conclusion is accepted beyond serious debate in the field of developmental psychology.”

And a brief sponsored by the American Psychological Association (APA) in 2005 asserted baldly that “none of the published research suggests conclusions different from” the “no difference” hypothesis.

This is simply not true. There was a study. It showed disadvantage. And it was ignored. Why? Perhaps because it came from Australia, far from the bright lights of San Francisco or New York.

END_OF_DOCUMENT_TOKEN_TO_BE_REPLACED

The following post is by Janna Darnelle and is cross-posted from the MercatorNet website  The push to present a positive image of same-sex families has hidden the devastation on which many are built.

Every time a new state redefines marriage, the news is full of happy stories of gay and lesbian couples and their new families. But behind those big smiles and sunny photographs are other, more painful stories. These are left to secret, dark places. They are suppressed, and those who would tell them are silenced in the name of “marriage equality.”

But I refuse to be silent.

END_OF_DOCUMENT_TOKEN_TO_BE_REPLACED

The following is a repost from the Family First website

Interviews to Watch Before You Vote
KEY, PETERS & CRAIG INTERVIEWED ON FAMILY ISSUES

At the recent Forum on the Family held in Auckland last week, the leaders of three political parties were interviewed – National, NZ First and the Conservative Party. The Labour leader David Cunliffe was invited but refused to attend. These interviews are important for New Zealanders to see and may provide important information to help you vote on election day. Watch here as questions relating to the definition of marriage, abortion, euthanasia, anti-smacking legislation, alcohol, marijuana and prostitution are put to the leaders.

INTERVIEW WITH JOHN KEY – NATIONAL (click on image to view) 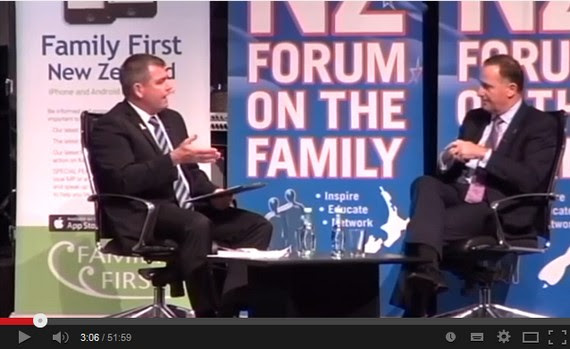 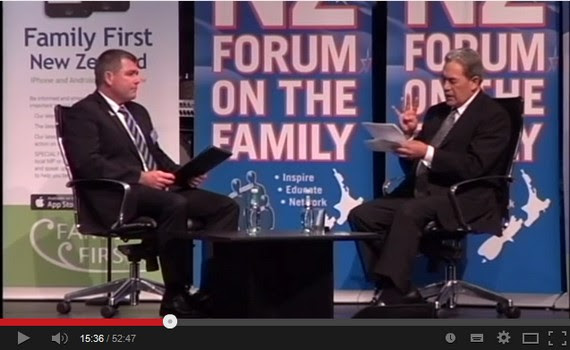 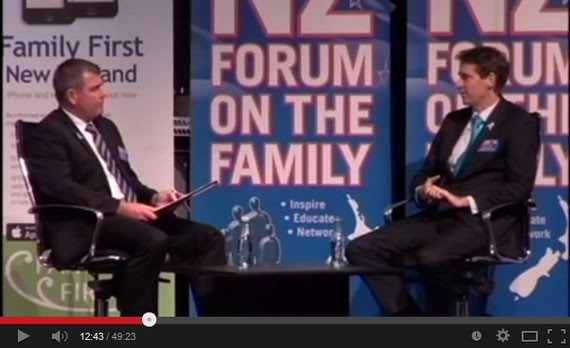 On the 17th April 2013, our Parliament in a night of insanity passed the Marriage [Definition of Marriage] Amendment bill; 77 to 44, it is a day that will go down in the history of our Parliament as a day of shame.

We were told by the homosexual lobby, that they longed for marriage equality, that Civil Unions were not going to satisfy their cry for justice and that it was a great injustice to be denied their “human right“ to marriage equality. The statistics compiled by Statistics NZ reveal a very interesting picture. The Civil Union Act came into force on 26th April, 2005. The number of same sex Civil Unions registered up to 31 March 2014, totalled 3,554 comprising, 1,454 female couples and 2,100 male couples.

END_OF_DOCUMENT_TOKEN_TO_BE_REPLACED

A bioethics expert argues that laws ensuring that every child knows its mother and father are unethical.

Britain’s first same-sex marriages will take place this coming weekend. In May Sir Elton John and his partner David Furnish plan to exchange vows, making them spouses as well as parents to their two sons, Zachary and Elijah. Jubilant campaigners say that fears of an impending social calamity are nonsense.

In The Conversation, a law lecturer at Cardiff University, Leanne Smith, comments: “Ultimately, no institutions, religions, lifestyles or individuals have been harmed … The advent of gay marriage changes virtually nothing – but by validating gay relationships, it will transform lives and spread happiness.”

But something has changed: Elijah and Zachary do not know which of the two men is their father and they do not know who their mother is. The California birth certificates list Sir Elton as the legal father and Furnish as the legal mother. The biological mother and the surrogate mother may or may not be the same person, but they have been excluded from the boys’ lives.

To read the full article at MercatorNet click here

One of the world’s best known religious leaders has came out in favour of same-sex marriage. But what does he really think?

Widely reported as having recently “thrown his moral weight behind gay marriage”, the Dalai Lama’s actual words to talk show host Larry King were not quite so compelling. He described sexual morality for the non-religious as a “personal matter”, but noted that same-sex marriage was “up to the country’s law”. When pressed further on his personal opinion, he replied “That’s okay. I think individual business”.

Westerners have confused and contradictory impressions of Eastern religions and philosophies. On the one hand, fantasies of the mysterious and enigmatic Orient are nothing new: Omar Khayyam was as popular in Victorian England as Jalalladin Rumi is in America today. Nor need we watch Madam Butterfly to understand how Asia has continued to serve as a canvas for weird Western dreams, projections, and insecurities.

Some compassion for the Dalai Lama is duly warranted. The poor guy is, at face value, a perfect vehicle for the Western ideal of a tremendously wise, compassionate, yet safely foreign master – the nearest living equivalent to Yoda from Star Wars. But at the same time he’s the serious head of a serious sect of Buddhism, the spiritual leader of a dispossessed people, and a living manifestation of Avalokite?vara, the bodhisattva of compassion, roles he must somehow balance against the neediness of Westerners anxious to find a convincing spiritual counterpoint to the stifling moral authority of their own religious heritage.

END_OF_DOCUMENT_TOKEN_TO_BE_REPLACED

Candace Owens Interview with Robert Malone re up to 1000% increase inMalignancies, Miscarriages, Stillbirths

Is the abortion pill safe?

..” the cold, hard truth that if we won’t fight on something as elemental and obvious as boys-can’t-be-girls, we sadly deserve the cultural annihilation to come.”