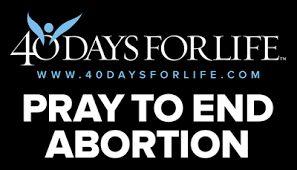 Those participating in the vigils are praying for an end to abortion, for women who are considering an abortion that they may chose life for their precious child in the womb, for women who have had an abortion and who are now seeking spiritual and physical healing. Prayer is being offered for those  doctors and nurses involved in the killing of the unborn, that they will turn away from the abortion industry and promote a culture of life.

The cumulative results of the organisation since a national launch in the USA in 2007 have been exponential. 675,000 volunteers have participated from 607 cities in 32 nations with 3,895 local campaigns, saving 11,165 lives from abortion, seeing 127 abortion workers quit the abortion industry and 66 abortion centres close. This has all happened because people in the local community have turned to God in prayer to answer the crisis of abortion.

Right to Life encourages Christians to become involved in these prayer vigils to promote a culture of life and to oppose a culture of death. 40 Days for Life Vigils are being conducted in the United States, Canada, Australia, Hong Kong, Croatia, Columbia, Mexico,. England, Scotland and Romania.

It is disappointing that ALRANZ, a small pro-abortion anti feminist organisation, is opposed to prayers for an end to the killing of the unborn and for support for women to choose life for their unborn baby.  There has been verbal abuse, theft of signs and prayer material at the Christchurch prayer vigil site.

Those participating in the vigils will not be deterred by this harassment.

“Rescue those who are unjustly sentenced to die;
save them as they stagger to their death.
Don’t excuse yourself by saying, ‘Look, we didn’t know.’
For God understands all hearts, and he sees you.
He who guards your soul knows you knew.
He will repay all people as their actions deserve.”